In 1946 and 1947 Gilbert American Flyer cataloged the American Flyer Accessory 584 Bell Danger Signal. These were a continuation of the pre war O gauge model. This incorporated a die cast metal ramp base for a roadway extending up to the top of the track. Along side of the road is the same crossbuck blinker signal as used on the 582. There is also a die cast figure with a caution sign held up to warn automobiles and trucks. 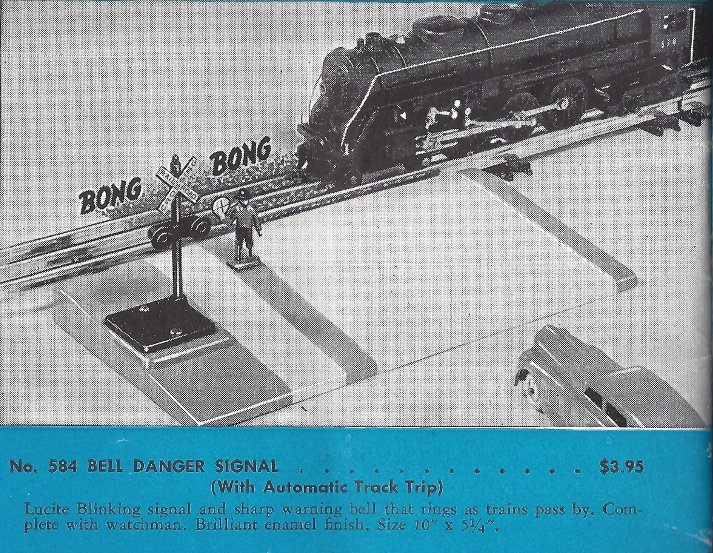 Similar to the 582 Blinker, the 584 was supposed to be activated by the 695 track trips but boxed examples include the earlier 696 trips. As the rolling stock wheels encounter the track trip, a contact is made, the crossing signal blinks and a “bell” located under the base goes ding for each wheel. One curiosity about these 584 crossings is that the blinker and warning man are at the left side of the road – not on the right as in American prototype signals. 1948 brings a major change to the Bell Danger Signal that parallels the change to the blinker. A much smaller base made of sheet metal holds the same flasher assembly as the 760 and a small metal hut holds a solenoid activated bell. As rolling stock wheels encounter the 696 Track Trips, the lights flash and the bell dings. This basic design continues until 1957 when the 5 digit numbering system changes the catalog number to the 23579. Connections for the wires use Fahnstock clips during this time.