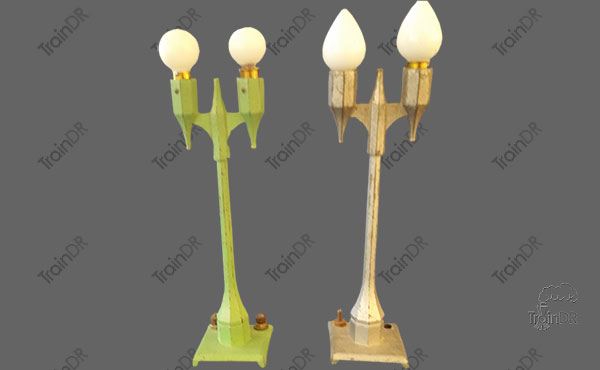 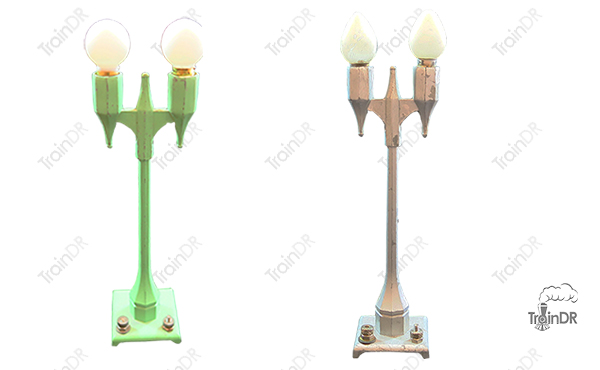 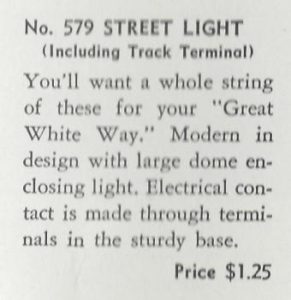 This Gilbert American Flyer designed street lamp entered the product line in 1940 and included a No. 690 Track Terminal and wires. The bulbs came in a small parts can like the ones in Erector sets used for screws and nuts. Cushioned by tissue paper was a frosted bulb with a finial glued to the top. Lamp posts are known in silver or in green paint. There is a banner on the page that these are scaled properly for O gauge.

The 1941 Street Light image is retained from the 1940 catalog but the description has been cut to about ½ the number of words. The track terminal and wires allowed the user to reduce the amount of wire to get power to the light but at the expense of having to watch the light get dimmer and brighter as the speed of the train was changed – or go off when the power to the track was stopped.

The post war No. 579 Single Street Light appears identical to the prewar version. This time the image shows the green version and still includes the finial. The description is missing some of the information as it was associated with the dual street lamp and can be seen below.

Same image as the 1946 catalog for the No. 579 Single Street Light. Somewhere in this time period the Street Lights no longer are provided with finials and the bulbs change from round to pear shaped frosted. The description still indicates that a No. 690 Track Terminal is included.

By 1949 there are boxed examples with dated inspection slips where the round bulbs with finials have been replaced with pear shaped bulbs. The track terminal is still included. 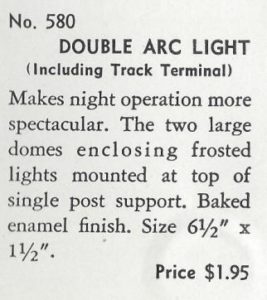 Both single and double street lights of the same basic style entered the catalog in 1949. Made of die cast metal and painted either green or silver, they came with a No. 690 Track Terminal to simplify wiring. The frosted bulbs with finials glued on were contained in a small parts can similar to those used for screws and nuts in Erector sets. For some reason the single light is called a single street lamp and the double is called a double arc light.

The illustration in the 1941 catalog for the No. 580 Double Arc Light was the same as in the 1940 catalog but the description was severely curtailed.

The image shows the silver painted version but otherwise is similar to the image in the prewar catalogs. Finials are still included along with a track terminal. The description applies to both the single street light and this double light.

The image is the same as previous years and the description has stayed the same as well. Somewhere in this time period the street lamps begin shipping with pear shaped bulbs and the finials are eliminated.

The repeat of earlier image and description. Boxed examples with the inspection slip demonstrate that pear shaped bulbs have replaced the round bulbs with finials in these lamp posts.