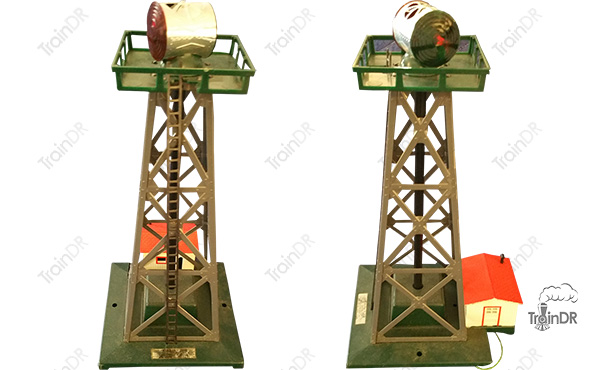 Gilbert American Flyer added towers to the product line in 1951. The towers were actually produced by the Colber Company (a maker of toy train accessories) and several other Colber manufactured products were also introduced to the Gilbert American Flyer catalog in 1951, including bridges, and a pedestrian overcrossing. The products must have sold well and something went wrong with the Gilbert/Colber relationship leading to the introduction of Gilbert designed and manufactured towers starting in 1953.

The Revolving Aircraft beacon seems a little odd as a train accessory but provides action and color – particularly for night action. The Water Tower and Oil Derrick equipped with bubble tubes provided both light and the bubbling action. The effect was achieved with a glass tube filled with Methyl Chloride, a chemical with a boiling point achievable by a light bulb in the base of the tower. The boiling bubbles rise through the liquid only to condense at the top as they cool and then returning to liquid, they join back into the fluid returning to the bottom to be reheated and rise again. 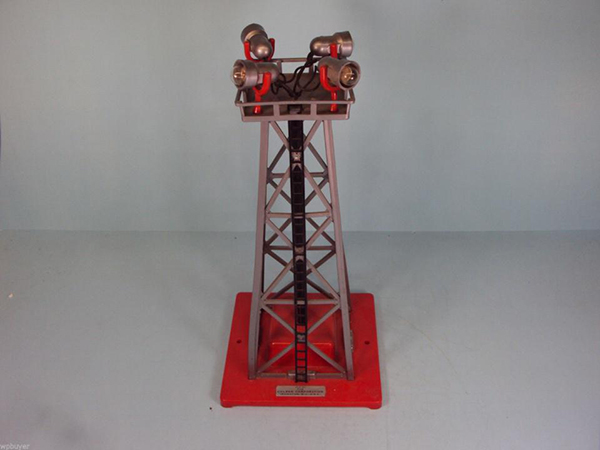 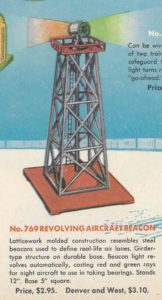 1950 was the year that operating towers were added to the Gilbert American Flyer catalogs. The towers were actually produced by the Colber Company and provided Gilbert a quick addition to the product line to test the popularity of a new product idea without the need to invest in the tooling to produce the product. The No 769 Revolving Aircraft Beacon has a plastic superstructure and base supporting a platform and has a rotating beacon at the top that provides a red/green alternating beam similar to the prototype towers at airports. While these were popular judging by their ready availability even today, they seem a little incongruous as a toy train accessory since they support air traffic. 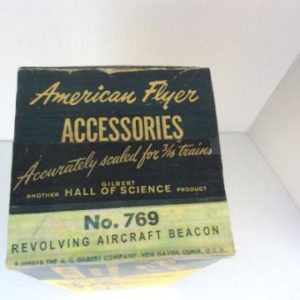 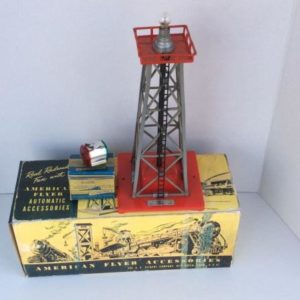 There is speculation as to the reason for the “A” suffix on the part number which was generally used by Gilbert to signify a modification or upgrade to the product. (Think three button controls for the 752 Seaboard Coaler, two button controls for the 758 Sam the Semaphore Man or the redesign of the 720 Remote Control Switches.) So what was the 769 before the “A” was added? The preparations for the addition of the revolving aircraft beacon to the product line must have started much earlier in the year and would likely have been a sort of “package deal” with Colber. Gilbert was generally very in tune with costs, reliability and what the market would accommodate. Early revolving beacons made and sold directly by Colber have a kind of vibrating motor mechanism to rotate the beacon. This would have been more costly than the heated air convection method where the beacon top interior needle rests in the dimple of a hot burning light bulb. Gilbert may have initially prepared documentation for the Colber ‘motorized’ version as the 769, but then either Gilbert or Colber engineers came up with the heat and bulb version along with its cost reduction and this became the 769’A’. 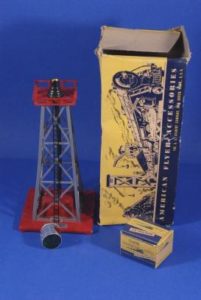 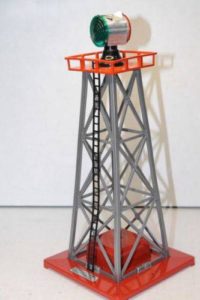 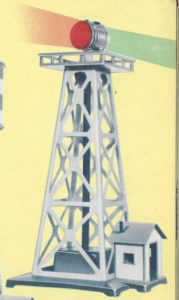 In 1953 Gilbert introduced its own version of the No. 769A. The somewhat fragile plastic girder work was replaced with a stamped sheet metal version with rivet detail. The base and upper platform remained plastic and an extension to the base was provided to mount one of the small sheds often used on Gilbert American Flyer accessories. The same heat bulb convection method is used to rotate the beacon as was in the earlier Colber manufactured product. 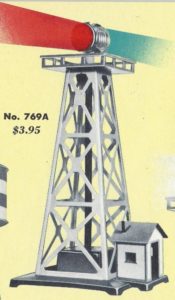 The image and catalog description for the Gilbert American Flyer No. 769A stayed the same in the 1954 catalog as in the 1953 version. 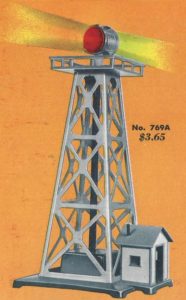 The Gilbert American Flyer catalog for 1955 includes the same image and description as earlier years. The price dropped from $3.95 to $3.65. 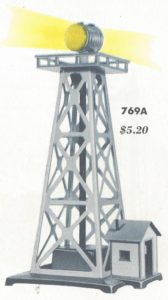 In 1956 the image loses its red and green rays but is the same photo and description. The boxes change to the red/black/white color scheme. 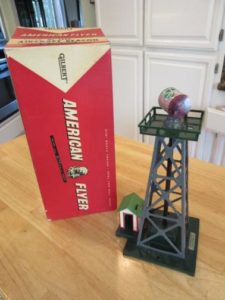 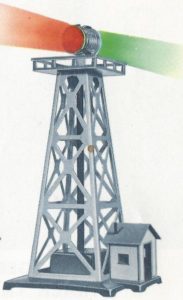 For 1957 the red and green rays are back, the image is the same but the description has been severely edited and condensed. The product number has changed to the five digit No. 23769 reflecting the installation of the IBM accounting computer system. The ‘A’ suffix is dropped – probably due to the inability of the IBM system to handle the ‘A’. 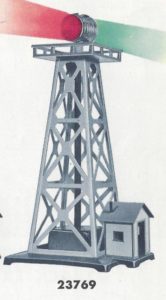 Image is the same for the 1958 Gilbert American Flyer Catalog and the description is carried over from the 1957 catalog. The price has gone up. 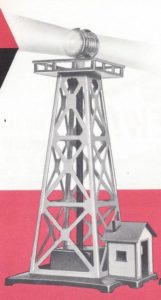 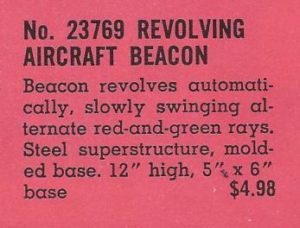 The catalog image for 1959 loses the red and green rays again but uses the same image and description otherwise. The price drops from 1958.

Image, description and price are all consistent with the 1959 catalog. Only the color has changed. 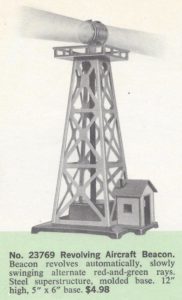 he 1961 catalog image and description are identical to the 1960 Gilbert American Flyer catalog. The price is also the same. 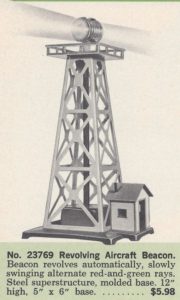 Somewhere in the early 1960’s the shed changed from sheet metal construction to molded plastic. The catalog image does not reflect the manufacturing change which was likely done as a cost saving move. The photo above is of an MTH reissue of the No. 23769 with the plastic shed. The 1962 catalog has an image and description carried over from the 1961 catalog. The price has gone up by $1.00 reflecting the inflation of the time. 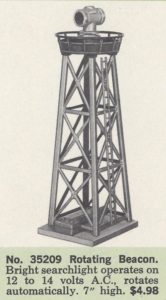 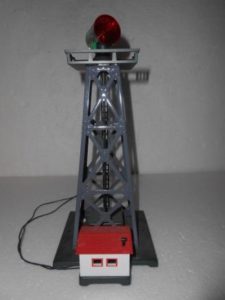 Also in 1962 Gilbert American Flyer cataloged an HO revolving beacon. These were made for Gilbert by the Ideal company in an arrangement similar to the 1950’s Colber arrangement. The products are similar but the packaging says Ideal on some and Gilbert on others. 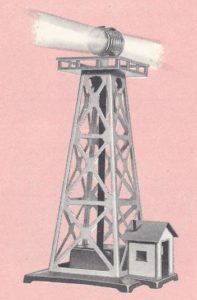 The larger emphasis on trains and train items in the 1964 Gilbert catalog has the return of the image along with the description similar to the 1962 catalog. The price has remained the same.