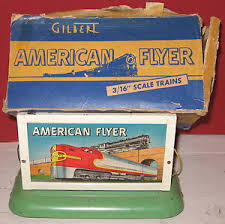 Materials and Features: The base and back shell are painted green sheet metal.

For the 1946 to 1949 version, the frame for the clown/circus image is painted white die-cast metal. For the 1950 versions the painted white frame and image are sheet metal.

From 1946 through 1950, the 577 is equipped with lights mounted in the base that illuminate the image.

Inside the housing is a motor-driven impeller (fan) that blows air into a whistle chamber that plays two notes. The whistle was offered with two means of activation: first, a track trip was provided that could be used to blow the whistle when a train passed over the trip. Second, a push button was provided for manual operation.

The billboard whistle has its beginnings at American Flyer Manufacturing Company in Chicago.

The model 2029 is a two-sided billboard with a whistle mechanism in between. When Gilbert acquired the American Flyer product line in 1938, it continued this design.

In 1939, Gilbert American Flyer introduced the model 577 with the image of a Royal typewriter. 1939 and later versions are single-sided, with the billboard on one side and a green housing behind it.

In 1940 and 1941, the image changed from the circus to the clown to promote Ringling Brothers Barnum and Bailey circus.

In 1946, this circus promotion billboard whistle was continued and stayed in the product line until 1949.

In 1950, the 577 model number was continued, but the image changed to advertise “AMERICAN FLYER,” and showed the newly-introduced Santa Fe diesel locomotive along with the Union Pacific 4-8-4 Northern.

In 1950, the image frame was changed to sheet metal instead of the die-cast frame from earlier versions. Also in 1950, the 577 was offered in a non-lighted version—the 577NL.

There is no service manual listed for the 577, but it would be similar to the 566 Billboard whistle Form 1645.

The 577 whistle was produced in 1947 through 1950 and had a green metal base. The whistle was different from later years as Gilbert began to move towards plastic materials. The picture on the sign was one of several including the Royal Typewriter company, Ringling Bros Circus, Fox Mart, and American Flyer Trains. The whistle came with an operating button and was hooked up to a transformer for the model railroader.