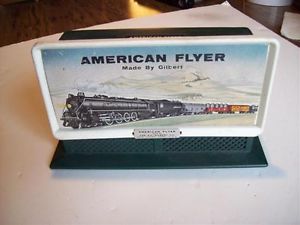 Materials and Features: The Number 568 has a plastic housing – this was an update to the metal versions produced from before WW II through 1955. Inside is a motor driven blower that sends air through a two note whistle chamber. The resulting sound is a good impression of a locomotive steam whistle and the motor noise adds a satisfying sub audio grumble.

Predecessors include: number 577 and number 566

The prewar 2029 whistling billboard that Gilbert inherited from the American Flyer Manufacturing Company morphed into the 577. The 577 became the 566 and both had sheet metal housings. The 568 introduced a better looking and probably less costly to produce plastic housing

The 568 whistle was produced in 1956 and had a green plastic base. The whistle was different from earlier years as Gilbert continued to move towards plastic materials. The picture on the sign was of a northern railroad. The whistle came with an operating button and was hooked up to a transformer for the model railroader.