The American Flyer 21088 0-4-0 Franklin Steam Locomotive. This locomotive features a motor, a reverse unit, a smoke unit, metal wheels, and a plastic body.

The American Flyer Locomotive Old Timer 21088 Franklin was an American 4-4-0. It would have had 4 leading, 4 driving, and 0 trailing wheels. The FY&P railroad was known as the the Franklin & Pittsylvania and was named for the area it served. Headquartered in Rocky Mount, Virginia it was mainly leased and operated by other railroads. he F&P was finished in 1880 and was a relatively late arrival as far as railroads go. The lease began in 1880 and was followed by many off and on years and the eventual demise of the line. Gilbert replicated the line with the Old Timer model known as the Franklin. 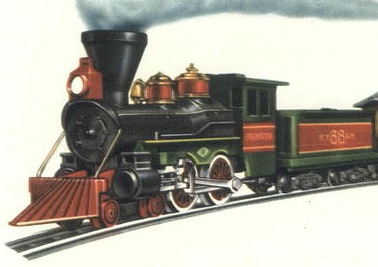 There were 3 models of the Old Timer produced. These included the following: