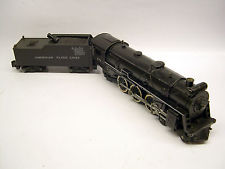 The American Flyer Locomotive 293 lettered for the New York, New Haven and Hartford Railroad ran from 1872 until 1968 and dominated rail traffic in the region. The railroad was a dominant player in the New England region and at one point had as many as 120,000 employees and over 2000 miles of track. In 1969 the line was merged into the Penn Railroad system after multiple bankruptcies.

Gilbert began manufacturing the American Flyer Locomotive 293 Pacific New York, New Haven and Hartford train in 1953. The train had a plastic tender and link coupler with black weight. As it was a Pacific engine, it had the 4-6-2 wheel configuration and simplified valve gear it was designed to provide a more impressive presence than the smaller Atlantic locomotives but could be cost competitive. The 293 is part of a series of numbers and features that continued in the American Flyer S gauge product line until the end of operations in 1966.

For features, the American Flyer 293 Pacific type locomotive included a lucite headlight lens, piston and smoke style with a pull more engine giving it extra torque for pulling power. The locomotive appeared during the transition time for couplers and change to plastic molded parts from formed sheet metal.

The 1953 production moved to a plastic molded tender body and late production includes examples with knuckle coupler trucks instead of the earlier link couplers. Other variations include tenders with coal pushers, marker lights and traction or “pull-mor” tires on the drivers. Some of these variations in the American Flyer 293 are evidence of the changes occurring in the product line in general during 1953 and 1954 (last year of 293 production).