These are the installation instructions furnished by the A. C. Gilbert Co. to customers to aid them in the installation and operation of American Flyer equipment. Specifically, this bulletin is for the American Flyer Semaphore 758 Manual Installation instructions. A semaphore was used to signal train engineers with key information regarding the use of rail lines. A semaphore is a system of sending messages by holding the arms or two flags or poles in certain positions according to an alphabetic code.

The 758 has a single push button control. When you push the button, “Sam” jumps out of his hut, the semaphore lowers to the stop position, and a circuit connected with the track interrupts the power to the locomotive, bringing it to a halt. When you let go of the button, the circuit is restored and the locomotive gets power again. Two disadvantages – you have to hold down the button and the action is limited to manual operation. Also the locomotive reverse unit must be in the fixed forward position so that when power is restored, it continues on its way. Otherwise the reverse unit cycles into the neutral position and you have to manipulate the transformer to get the locomotive to go again.

So the 758A is developed. Two push button control (one red, one green). Push the red button, Sam jumps out and the semaphore drops to stop position. No need to hold down the button. Also a resistor is inserted into the power feed to the track so that just enough power is fed to keep the reverse unit from cycling (in theory) but not enough to enable to locomotive to continue moving. You can push the red button and when the train reaches the track section powered through the accessory, the train will stop. Push the green button and power is restored and the locomotive will continue. And Sam jumps back into his shack and slams the door. Semaphore arm raises to the go position.

The enhancements to fix these issues came with the introduction of the 758A. Now there were two buttons. Pushing the red button made Sam jump out of his hut and stay there – along with the semaphore staying in the horizontal position (red). Additionally the circuit was enhanced with a power resistor that kept just enough current on the track to keep the reverse unit from cycling but not enough (usually) to keep the locomotive moving. Then when the green button was pushed, Sam jumped back into the hut, the semaphore flag raised to the up (green) position, and full power was restored to the track allowing the locomotive to continue on its way.

The 758 has a single coil solenoid whose plunger is connected to Sam and the semaphore flag, the return is by a spring. The 758A has a dual coil solenoid with a plunger similarly connected. The stop and go functions are activated by one or the other solenoid being connected by the appropriate button.

The top of the mast, flag and lamp along with the ladder are re-used parts from the 588 semaphore that was cataloged pre-war and again in 1946 and 1947.

Instructions for Setting Up and Operating No. 758 “SAM”, The Semaphore Man 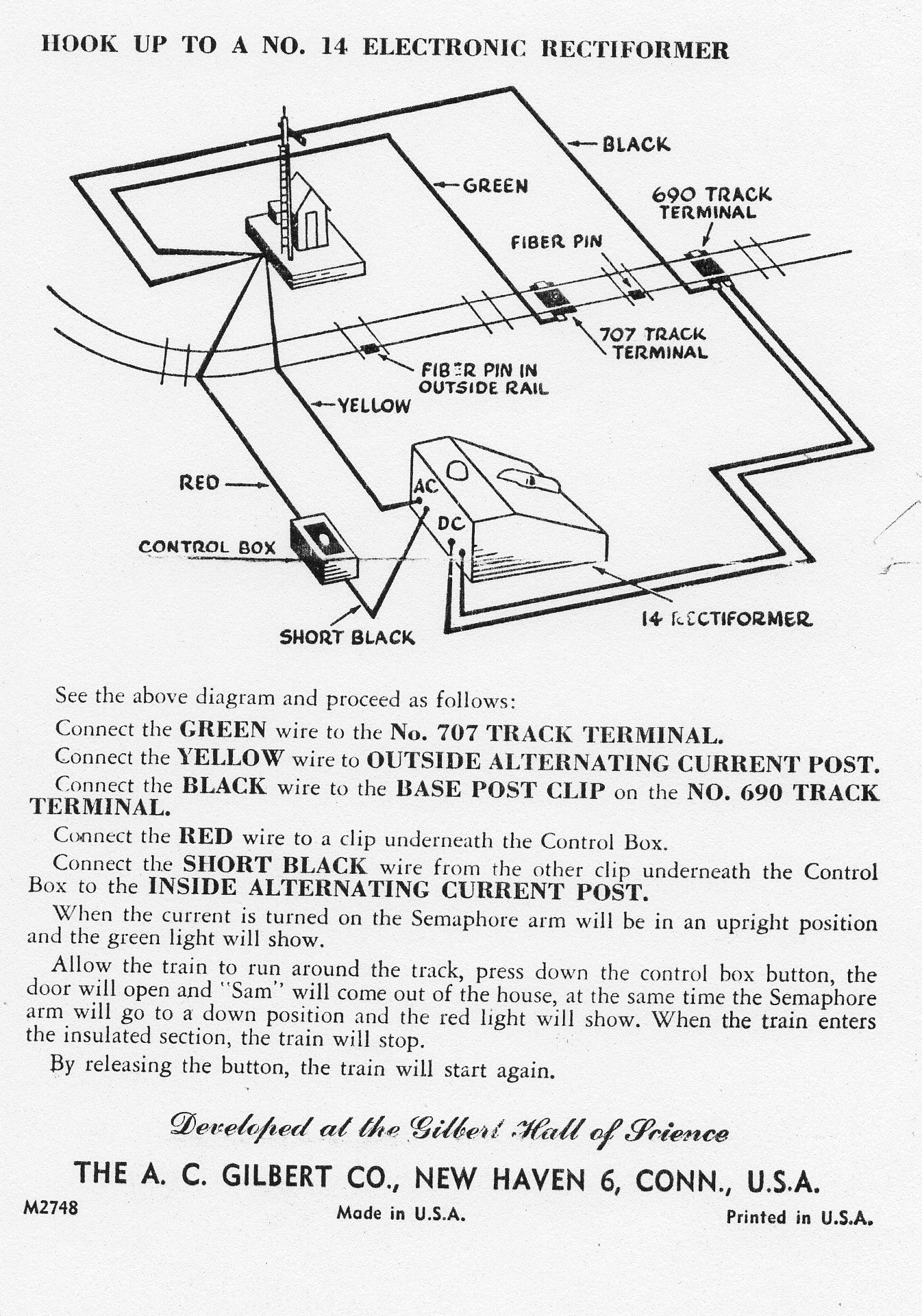 Hook Up To A No. 14 Electronic Rectiformer

Instructions for Setting Up and Operating No. 758 “SAM”, The Semaphore Man