The Gilbert American Flyer transformers generally increased in their ability to deliver power to the layout with increasing size and increasing catalog number.

Transformer design through the 1946 to 1966 time period moved through a variety of form factors. Changing electrical safety requirements over the period caused some redesign and changes in available and approved materials enabled redesigns for cost savings. In general the higher wattage the more costly the transformer and the addition of lights, meters, multiple train control, additional terminals and on/off switches added to the cost and selling price. The early Gilbert American Flyer Transformers used sheet metal for the enclosures to help with the general safety requirement to restrict catching fire or letting fire out of the enclosure in the case of overheating. Underwriters Laboratories became the safety approval agency over the time period as well and their fire safety regulations and material approvals influenced the designs.

While the Gilbert American Flyer Transformers were well designed and were UL tested at the time, they are now over 50 to 80 years old. Unless thoroughly evaluated by a professional, they should not be used. There are modern transformers produced by Lionel (the current owner of the American Flyer product line), American Models and MTH (also makers of gauge American Flyer compatible products). They are available in a range of sizes to power layouts from a circle of track to large and complex track plans with switches and many accessories. 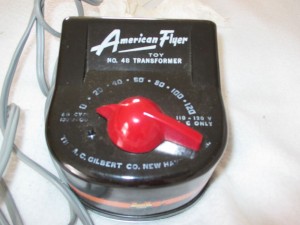 The smallest enclosure used in the transformers was a metal oval about 4 inches wide, 2½ inches high and 2¾ inches tall. Single train controls and bare bones design for the least expensive starter sets. Examples of this design are the No. 1 of 1950 – 1952, and No. 1 ½ of 1953. The 5, 5A, 5B, 6 and 6A also used this enclosure. The same enclosure was used for the 314AW locomotive whistle control. Examples of small sheet metal rectangular enclosures include the 22033 and 22034 All Aboard transformers of 1965 – 1966, and the uncataloged 16C of 1952. These were basic sheet metal box shaped.

The next size of rectangular sheet metal enclosure was used for several versions of transformer. About 5” wide, 4 inches high, and 3½ inches tall, they are also a basic box shape. No. 2, No. 2B, No. 3, and No. 4B. use this enclosure. 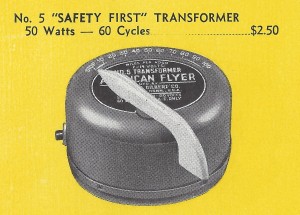 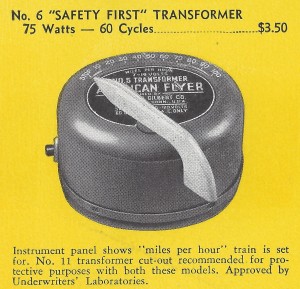 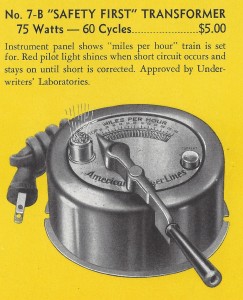 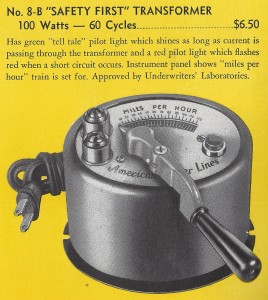 There is a larger oval metal enclosure design used for the , No. 7, No. 7B, and No. 8B transformers. These have an engraved plate on the top with the speed markings and are equipped with a variety of handles, lights, circuit breakers and buttons. The No. 7 and 7B are shorter than the No. 8B but are the same footprint.

The No. 9B and No. 12B designs used a large sheet metal case with rounded corners. They also included an engraved metal top plate with the speed and other nomenclature markings. 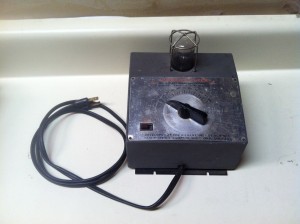 Both the No. 14 and the No. 16 Directronic Rectiformer power supplies came in a rectangular sheet metal enclosure with sloping front and the rectifier tube sticking out of the top at the rear. Speed control is on the sloping front. 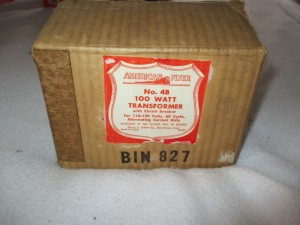 In 1953 Gilbert American Flyer engineered a series of designs using Bakelite plastic for the enclosures. This would have been a cost saving as the enclosures could be molded automatically and did not require a list of fabrication steps, painting and assembling. The No. 1 ½, No. 1 ½ B, No. 22004, and No. 22020 came in the small D shape plastic enclosure. These are very common and came with many low end sets. The No. 4B, 22030 and 22040 used a larger D shape plastic enclosure to accommodate a larger, more powerful transformer component inside. Transformers No. 16B, No. 17B, No. 19B and No. 22050 use a medium Bakelite plastic case. These are part of the higher power output transformers equipped to power a train and several accessories. 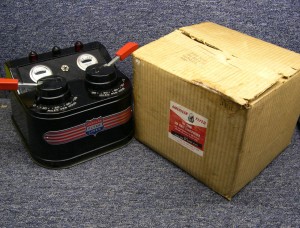 The high end models include meters for monitoring the voltage on the tracks along with the current being used by the train. They also include the Gilbert American Flyer “Dead Man” control – a handle that can be raised to stop the train and eliminating the requirement to swing the handle to lower power setting. This feature can also be used to conveniently activate the locomotive reverse mechanism. The largest cases are used in the dual train control transformers No. 18B, No. 30B, No. 22060 and No. 22080. These large transformers can power two trains and many accessories. Again they are equipped with a variety of meters, lights and switches. The last case design is a revision of the plastic cases. The single train control version is the No. 22035 and the dual control version is the 22090. These are equipped with some features not previously available on Gilbert American Flyer transformers including a minimum voltage to hold in the reverse unit, push button for reverse unit activation (not in a transformer since the 1940’s).

The transformers were available in a range of power ratings to accommodate every application from a simple circle of track and a small train to large complex layouts with several accessories and track switches. Rating the transformers by wattage is a seemingly straightforward indication of the power available but this is only directly applicable to powering light bulbs. The locomotives, and vibrating and motorized accessories, as well as the solenoid operated action cars, accessories and switches, operate on units called Voltamps or VA. In a steady state the two units are about the same but the VA for a motor will vary greatly with load so a long train will require more VA than a short lightweight train and the solenoid operation takes a big slug of current generally dimming the lights on the layout when activated. Gilbert American Flyer engineering had to rate the transformers in a way to provide the purchaser with enough information to enable the purchase of a transformer with sufficient power for the planned layout but not requiring a complex electrical lesson. The units of watts sometimes change from year to year for the seemingly same transformer. This occurred as UL changed the specification for evaluating the power available from a transformer. One of the dealer advance catalogs has the UL symbol blacked out because the designs did not meet the new specifications. They must have been obtained with some late night hours in the engineering department in time for the holiday production as the consumer catalog has the UL logos. UL certification takes several weeks per device so it must have been a struggle to get half a dozen transformer designs through the approval system.

Many of the early Gilbert American Flyer transformers have rubber coated power cords. Some of these have held up remarkably well since the late 1940’s. Later units used vinyl insulated power cords and many of these have become brittle with the insulation breaking away from the copper conductors.

With the newest of the Gilbert American Flyer transformers now at least 50 years old, they should be inspected by a professional and provided with new power cords and other parts as needed for safe operation. Any unit that has had long exposure to moisture, extreme heat or extreme cold should become a shelf display as the risk of improper operation damaging the powered equipment or causing a fire is not worth it. 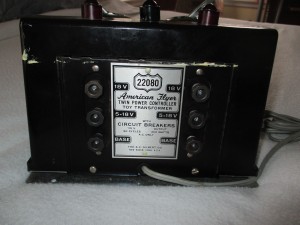 Gilbert received a patent for enamel insulated wire. This was used in winding the transformers and greatly reduced the cost. Earlier wire is silk or cotton insulated and is much more expensive to manufacture. Also transformers are more efficient and produce less heat as the conductors are closer together. The enamel coated wire can be wound much more tightly than the cloth insulated wire. Gilbert was able to manufacture transformers more economically with the enamel wire – leaving the competitors having to pay Gilbert a royalty to use the enamel wire.

In addition to powering trains for the hobbyist, some industrial and educational labs used the variable controlled output voltage to power experiments. I recall seeing a documentary film in grade school about the famous Bell Laboratories and sitting up in my seat when I saw a scientist checking a No. 19B out of the storeroom for use in his experiment. None of the Lionel guys in my class seemed to notice.

The late forties DC powered locomotives required a DC power source. Gilbert American Flyer provided these as the No. 14 and No. 16 Directronic Rectiformers. They used a vacuum tube rectifier to convert the AC to DC. When one of the larger locomotives is operated with a heavy load, the vacuum tube rectifier provides a bright blue glow probably indicating a not too healthy exposure for the operator.   Click Here to learn more about rectiformers. These units have special transformer windings to provide the filament voltage for the vacuum tube along with AC for the accessories and the current for the rectifier to convert to DC. Again these should be gone through by a professional or better put them on the shelf and use a modern heavy duty DC power pack designed for model railroading. In addition to the Directronic Rectiformers, Gilbert American Flyer offered the No. 15 Rectifier. This used a selenium/copper stack to rectify AC input voltage into DC.

Again the components will have aged and make an interesting conversation piece but should not be used. (overheated selenium does NOT smell good). These rectifiers came on a die cast metal base or a wooden base due to material restrictions during the Korean War.

Accessories to the power equipment include external circuit breakers No. 11 and No. 13 to be used with the transformers not equipped with circuit breakers. Lastly the was supplied to smooth the DC coming out of the DC supplies when using an early Air Chime Whistle equipped locomotive. The rectified AC makes a choppy wave form that was producing an annoying noise from the tender or B unit mounted speaker. The No. 18 would reduce the noise a great deal. Transformers provided power for the trains and accessories and were critical to the enjoyment of the Gilbert American Flyer trains. They were second only to the cost of the trains as an investment by the user and bragging rights went to the kid with the largest transformer wattage.

Some of the transformers in the chart (Nos. 5 and 6) have ratings for 25 Hz. operation. This electrical supply was common in many rural areas and in general use in some parts of the US until the 1950’s when 60 Hz became the standard. 1940’s transformers are carry over of the prewar designs and specify 50 or 60 Hz operation. Southern California utilities supplied 50 Hz power until after World War II and Gilbert provided power sources to match. For off grid farms generating power with wind and generally using a 32 Volt DC system Gilbert provided the No. 10 Inverter. This device takes the DC input and produced a chopped wave AC output for use in powering transformers. Enough electrical noise comes out of these units to disrupt AM radio reception so there were probably some restrictions on use during radio listening time. There is a separate catalog listing for a fuse for this device so it is probable that a derailed train or a shorted wire would overload the No. 10 and need a fuse replacement. The available thermal circuit breakers in use in the transformers would not blow fast enough to protect some things and the Inverter may be in that category.

Powering a large layout often requires multiple transformers. To be sure of compatible outputs, the transformers must be properly phased. Generally this means that the ribbed side of the power cords must be plugged into the same side of the outlet or power strip (the one with the longer slot) After plugging the transformers in, this can be tested by touching a wire from each of the Base Posts. If there is a spark, then one of the plugs into the wall power should be reversed. Failure to align the phases of the transformers can result in higher than designed voltages and overheating.