This page includes links to all of the American Flyer Wiring instructions manuals and bulletins for owning and operating American Flyer accessories, trains, and track components.

Standard Number 1: All locomotives, lighted cars and action cars must operate on the 7 to 15 volt variable output from the transformers. Since Gilbert engineers designed and the factory built the motors and solenoids used for the locomotives and action cars, they could adjust the designs to operate correctly with this standard.

Standard Number 2: All lighted accessories and operating accessories must operate on the 15 volt fixed output from the transformers. Again since Gilbert engineers designed and the factory built the motors and solenoid used for the operating accessories, they could adjust the designs to operate correctly with this standard.

The wires have a color code.

Gilbert American Flyer calls this the Base and it functions as the power return for all wiring in a way similar to the mains power neutral wire. (Here there is a caution as the standard for low voltage wiring used for the trains is the opposite of the standard for house wiring. In house wiring Black is the hot or power wire). The transformer label for this wire is the Base Post.

Gilbert American Flyer designates black as the wire to provide the 7 to 15 Volt connection to the track for locomotive, and lighted car power. (Again there is a caution here as the standard for low voltage wiring used for the trains is the opposite of the standard for house wiring. In house wiring White is the neutral or return wire for the power.) The transformer label for this wire is the 7-15 Volt Post.

Yellow is the color standard used by Gilbert American Flyer for the power wire for lighted and action accessories and for action cars. The transformer label for this wire is the 15 Volt Post.

Similar logic applies for the accessories. Yellow and Black are the 15 volt power and the other colors activate various functions.

White, Black, Yellow, Green, Red and Orange are the most commonly used colors for the wiring and are used according to the standards above. However, there are exceptions. There were shortages for some of the colors immediately after World War II and during the Korean War. Due to these shortages Gilbert would substitute a non standard color for the standard one. Usually there would be a note included in the box to explain the change.

For a short time in the late 1940’s and early 1950’s Gilbert American Flyer produced locomotives that were powered by direct current or DC motors. When using these locomotive and power supplies, the wiring for the action cars becomes more difficult as it is necessary to supply the DC power to the track to operate the locomotive and AC power to the activation section and the Base Post side of the track to enable operation of the action car. There are special instruction sheet sections for this.

Normally accessories such as street lights, lighted towers, lighted stations, and lighted bridges would be expected to be provided with 15 VAC to power the light bulbs. Gilbert American Flyer often included a No 690 track terminal with these lighted accessories to enable the user to avoid long wire runs to parts of the layout away from the transformer. Usually both the wires supplied with the accessory were black but some of the time a black and a white wire were provided. While this use of the track terminal saved on wiring it provided lighting around the layout that would be on and off with the control of the locomotive and would be dimmer or brighter depending upon the 7 to 15 volt transformer output being used to control the speed of the locomotive.

Wire supplied with the accessories and action car controls or included in permanent wiring connected to the accessories and action car controls is usually vinyl (plastic) coated number 18 AWG (American Wire Gauge or size of the conductor [ wire is like pipe, bigger pipe carries more water, bigger wire carries more power ] just to confuse things the bigger the wire number, the smaller the wire). Most often the wire supplied by Gilbert American Flyer is stranded (many small wires bundled together within the plastic coating) but again due to wartime shortages, there were some things supplied with solid wire (single bigger conductor within the plastic coating). Again the wire size was number 18 AWG. 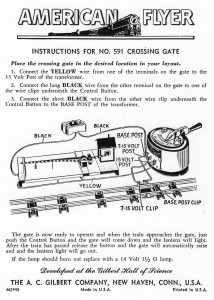 Instructions for No. 591 Crossing Gate

Gilbert American Flyer Accessories and Locomotives had a variety of different wiring configurations. Some components took AC power and some required DC power. All hooked up to a transformer to get the appropriate power for operation.