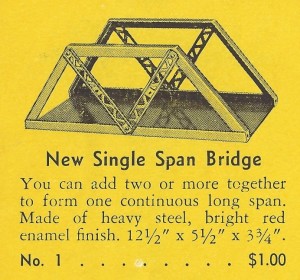 When Gilbert acquired American Flyer in 1938, they introduced Gilbert designed accessories to compliment the train line. The first Gilbert American Flyer design bridges used Gilbert Erector Set parts.  The migration of parts went the other way as well. The house at the top of an American Flyer signal tower became the Erector Set house. With the move to 3/16” scale, many of the accessories were scaled to match the trains but with enough space to accommodate O gauge products for cross manufacturer sales. The result was products that are slightly oversized for the post war S gauge product line, but slightly undersized for O scale. However, many of the Gilbert pre war bridge accessories continued in the post war product line.

Gilbert Cataloged several bridge designs as accessories to the American Flyer train line from the acquisition in 1938 to the end of standard production in 1964. The three basic types were the trestle bridge, the girder bridge and the truss bridge for conveying train tracks over rivers, gulches, other train tracks, roads and anything else that needed clearance. In addition, there was a cardboard trestle set with a girder bridge and a pedestrian bridge to allow layout people to safely cross over the tracks.

The first Gilbert American Flyer trestle bridges were cataloged in 1938 and incorporated Erector girder parts and the Erector hut, in a creative effort to tie the two product lines together. These were the No. 1 Single Span Bridge and the No. 2 Trestle Bridge with Tender’s House. The No. 750 Trestle Bridge was introduced in the 1940 catalog and outside of the war year gap stayed in the catalog until 1956. As the 23750 it remained in the catalog until 1961.

Both the No. 1 and No. 2 bridges were introduced to the 1938 Gilbert American Flyer train product line and show the beginning of the Gilbert influence on American Flyer by using Erector set parts. 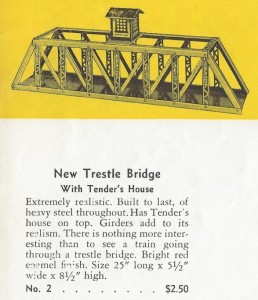 Gilbert included this smaller bridge in the 1938 catalog as it began to adapt the American Flyer product line to a Gilbert look and feel. The bridge is made from easy to construct sheet metal parts with a couple of Erector set parts included. The Erector parts help a simple bent sheet metal design by providing the look of girders. After assembly the whole American Flyer No. 1 bridge was painted the same red as the Erector set boxes.