What are the different types of American Flyer Train Motors

There are two main power sources for Gilbert motors, AC and DC.  For the most part most are AC motors.  There are a handful of other variations across the locomotives including where the whistle and smoke units are located.

American Flyer Steam Locomotives entirely used worm drive motors. The advantage of worm drive motors is that they allowed the model train to start slowly without being lurchy. Effectively a smoother start as the engineer provided power made for a more realistic toy train model experience. In addition, worm drive motors enable the locomotives to pull longer trains. 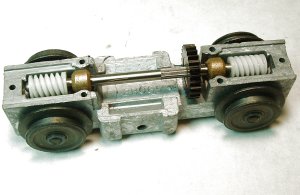 This is a Lionel manufactured diesel locomotive chassis

American Flyer Basic AC Motor
Basic AC motor with brushes at the rear of the locomotive and armature/field laminations about 3/8 inches thick.

This picture shows motor mounted to a chassis for a 300AC Atlantic from the late ’40’s. from the left: chassis, field coil, brush holder and housing. unit on the left with the coil and wires is the reverse unit, sometimes called the e-unit. The e-unit likely came from prewar where there were both mechanical reversing and electrical reversing – m-unit and e-unit. The armature shaft extends from the housing on the right, then has the armature plates and coils, then goes through a thrust bearing in the chassis and then the shaft has a worm cut into it. The worm engages the worm gear that is mounted on the axle of the right side drivers. Connection with the left side drivers is using the actual drive rod linkage to provide driving force to all of the drivers.

These earlier locomotives had the reversing unit mounted on the chassis and in the boiler. These locomotives have a two wire connection to the tender with a plug and socket at the top of the back of the locomotive cab.

All of the above use cloth covered and very flexible wires. After this the connector was eliminated and the wiring changed to vinyl covered ribbon cable.

Eventually a new two position (forward/reverse) e-unit was designed and is mounted to the back of the motor. The connection with the tender became a two pin plug/socket.

Lastly as a cost cutting measure the connector was eliminated and the wires are permanently connected from locomotive to tender.

This one has smoke in boiler with the four position reverse unit in the tender – and a four wire connector from the tender to the locomotive. Only the piston rod and piston for the smoke unit is shown. The smoke unit housing and wiring are not in this photo. This is from a 312AC and probably dates to the 1950-1952 time frame.

American Flyer DC Motor
DC Motor. Same structure as the basic AC motor, but field is permanent magnet instead of AC coil. Armature is wound slightly differently and the brushes are a different material. Only in 332 DC and 342 DC locomotives.

American Flyer Diesel Locomotives
All worm drive and all AC

This photo is of a Lionel manufactured S gauge diesel locomotive 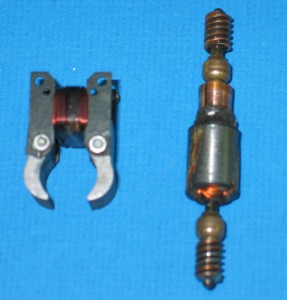 This is the field coil assembly and the armature assembly from the GP7 series of diesel locomotives, also used in the single motor PA’s and the handcar (74x series).

The primary difference here is that this is not a can motor and is a bit more industrial. This gave the engine additional pulling power – much like real diesel engines when compared to steam locomotives. 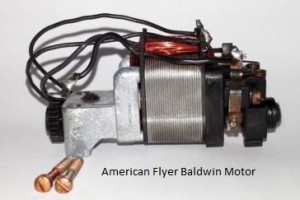 (argued as to whether x=3, 7 or 9) diesel motor – may be same as Baldwin diesel – again don’t have example to look at or source materials that reveal the info.

The Handcar, Track Maintenance Car and rocket sled motorized units all have AC motors as well. The handcar motor structure is similar to single motor diesel. Other two are unique.

All other American Flyer Motors are AC

The American FLyer 314AW motor has the whistle in the tender.  Others have tender mounted smoke unit motors.