American Flyer understood its market and the influence a visual and active display would have on the decision to purchase Gilbert American Flyer trains. Print advertising in consumer magazines and trade magazines was placed to excite the buyers and to encourage the stores serving those buyers to handle American Flyer products. 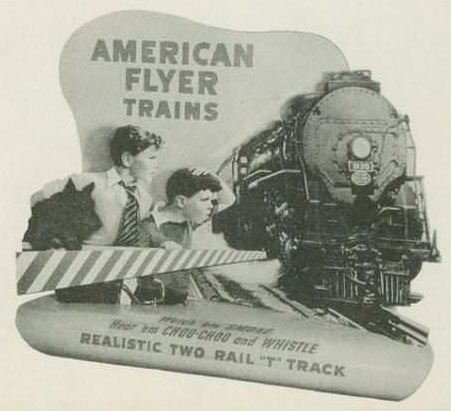 The consumers were provided information both through the print advertising in color full page ads in Life and smaller ads in a variety of other magazines and through the annual holiday season catalogs. The retailers were provided with promotional materials as well. Advertising and press releases were placed in trade journals extolling the profits to be made by stocking American Flyer trains and announcing new products and features. Trade shows provided the look and feel experience to encourage retailers to handle American Flyer as well. Specific dealer advance catalogs provided retailers with an advanced look at what was to be available for the upcoming holiday season and the retailers could get an advanced look at the dealer catalog items by attending one of the trade shows. As it became first available, then common, television promotion also played a part in the Gilbert consumer influence with the creation and sponsorship of the Boys Railroad Club series. Newspaper and comic book advertising also played a role. 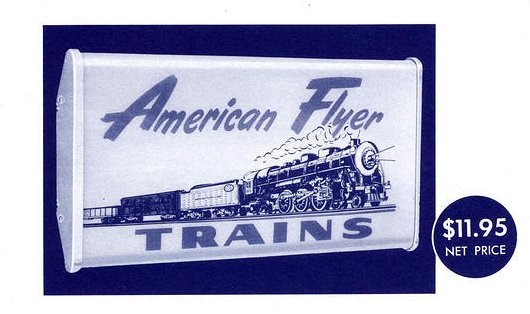 In addition, Gilbert published catalogs of dealer promotional items. Lighted signs, print banners, countertop displays all were offered to retail dealers to help them promote American Flyer trains to the customer. Among the promotional items were action display layouts that enabled the dealer to exhibit a variety of American Flyer trains and accessories and to display them in operation. There were several standard dealer display layouts cataloged and offered through the years and many were promoted as self liquidating and self reimbursing. The dealer sold the accessories, track and transformers at the end of the season and recovered all of the purchase price of the American Flyer dealer display.

For major retail customers, Gilbert offered custom designed and constructed operating layouts to attract buyers and enable them to dream of the possibility of creating such a miniature world of their own. These custom displays showed off the latest Gilbert American Flyer train and accessory products and placed them to best advantage to entice the viewer into asking parents, grandparents, aunts and uncles for the items to be under the tree from Santa.

In major markets, Gilbert operated Hall of Science showrooms that displayed all of the Gilbert products. Along with the American Flyer trains were Erector Sets, Microscope Sets, Chemistry Sets, Electricity and Magnetism, Optics Sets and so forth for the young scientists and engineers. These Gilbert Hall of Science showrooms were open to the public and showcased the American Flyer trains with impressive scenery, many operating trains and accessories and their sheer size. Miami, Chicago, Washington, DC and New York City all had a Gilbert Hall of Science. New York had the public displays on the ground floor and had a major display layout on the second floor that was restricted to the buyers for major train retail outlets. Sears, FAO Schwartz, Bullocks, Dayton Hudson, and so forth buyers would get the opportunity to view the newest trains on the layout that spanned the entire width of the building.

The layout was updated periodically to include the newest product offerings and was frequently used in photo publicity for American Flyer trains. It appeared in Railroad Model Craftsman, several of the American Flyer annual catalogs, one DIY book on model railroading and featured real running water in a lake with an operating paddle wheel ferry boat. The lake was fed by a waterfall and was spanned by several of the cataloged bridges along with a draw bridge made of Erector Set parts. Forced perspective was used by including the American Flyer HO trains at a higher elevation and in the rear of the layout fooling the eye into thinking they were full sized S gauge being viewed from farther away.

Gilbert used every opportunity to promote their American Flyer products and the backside of the factory in New Haven, Connecticut faced the New Haven Railroad tracks. A large display window on that side of the building showcased a large model of an American Flyer Hudson locomotive along with other Gilbert products.